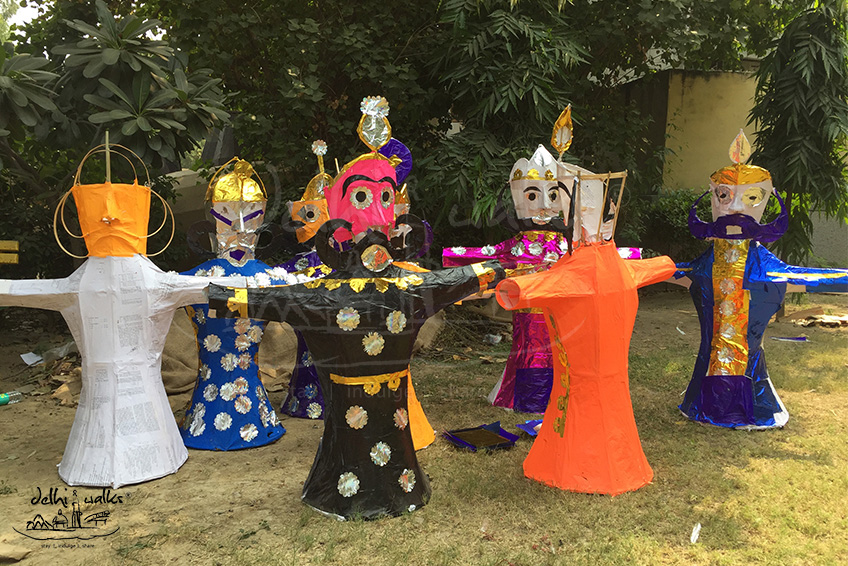 A day spent in a corner of West Delhi, filled with effigies of Raavan. A sunny afternoon around the place led me to a man who was on the steps of the ladder to decorate the moustache of the demon king. I cheekily asked him “There is time for it” he replied: “Time is for normal people, not us”.

Raavan making is an experience in itself, where right from the puppets which we see around as souvenirs to making the huge effigy, which is a much loved affair amongst the kids, is an immersion in itself.

“With ten heads, twenty arms with copper-coloured eyes, and teeth as bright as a young moon. His appearance for all others was as thick as a cloud or a mountain, or the god of death with open mouth. With all the marks of royalty intact, his bare body was replete with wounds inflicted by all the divine arms in his warfare with the gods.”

In all versions of the mythological tale, one significant point which is what makes Raavan demon like, is when he abducted the beautiful wife of Ram, took her to an alien land “Lanka” which later had ensued on a battle against Ram and Raavan. Thus Sita, the beautiful wife of Ram was won back by her husband when finally the good rested over the evil. In common imagination, while Ram is a shining example of a virtuous ruler, Ravana, is the sign of evil.

Be careful of the ladies around you! In colloquial hindi usage, if a man behaves wickedly, he is usually described as Raavan.

The burning of the effigies of Raavan rests and reconfirms our imagination of a world which marks the triumph of good over evil.

Raavan is described in mythology as the lord commander of Rakshasas, the numerous and the powerful demons of Indian underworld. He is known to have been scarred by a thunderbolt of Indra, by the tusks of Indra’s elephant Airavata, and by the discus of Vishnu. A breaker of all laws and a ravisher of other men’s wives, his abode was the large island of Lanka (now known as Ceylon) from where he ousted his brother Kuvera, lord of the Indian elves.

Riding on a magic chariot to sow seeds of mischief wherever he could, he was a known figure around. By spending many years of penance and worship of Brahma, Ravana in a long run had been granted immortality.

He knew which God’s door to knock. Raavan went to Siva and began to do penance, with a hope that he will be granted his wish. By standing on one of his ten heads,encircled by a ring of fire, for one thousand years. Eventually when he came to his last head, Siva asked his for his wishes. A staright demand of Raavan were three: Atmalinghal, the sacred phallus, for his mother, for himself immortality and the most beautiful woman in the Universe. Siva had no choice but to grant him his wishes. But he did not know, the type of demon he gave birth to.

Raavan’s defeat in the hands of Rama, had re-established the fact that the good always rests over the evils.

This is a much celebrated experience where in North India especially, effigy makers get to work up to three months ahead of Dussehra. Thin strips of bamboo are bent and curved shapes of the ravan structures. Old recycled sarees (from a Gujrati community market) are wrapped tautly around the bamboo frames. To make them more attractive, colourful biodegradable paper is pasted over the sarees.

Each effigy consists of heads of body, legs, crown hands weapons and the other accessories. A few months ahead of Dussehra, various places in Delhi are lively with big bamboo frames and colourful paper mache representations of the demon king.