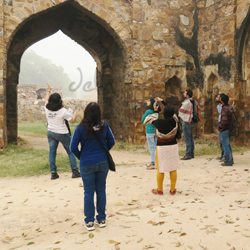 Popularly known as the ‘City of Djinns’, this is one place which marries faith with history! A royal citadel is now the abode of the djinns who grant your wishes. Come and explore The Djinn Tales with us.

A forgotten city kept alive by faith. Explore the remains of the fifth city of Delhi- Ferozabad. A royal citadel belonging to the medieval era that is now a place of worship for many. Popularly known for the Feroz Shah Kotla Cricket Stadium, it is a place where history and djinns reside.

Built by the third sultan of the Tughlaq Dynasty, Feroz Shah Tughlaq- Feroz Shah Kotla was the royal citadel or fortress of the city of Ferozabad. This city was built during the 14th century on the banks of river Yamuna that provided a natural fortification to the citadel. The fortress encompasses a structure that pre-dates the medieval period. It also has its own Jama Masjid and the chambers where the djinns or genies reside. Yes, you have heard us right! Feroz Shah Kotla is believed to be inhabited by djinns who can grant your wishes. On every Thursday evening, people visit this place to pray, leave their petitions and give offerings to the djinns with a hope that their prayers will be answered. Come and feel the faith that people have bestowed upon this fortress.

Join us if you want to know more about the Djinn Tales.