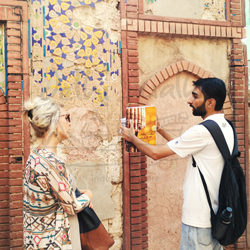 The walk takes you through the narrow alleys with numerous flower vendors selling ritual offerings like, rose petals and incense sticks to be lit before the main tomb shrine along with these one can often point out various tombs or graves in their surroundings, devotees tie up red sared thread at various spots considered to be sacred with in the complex. Enjoy the fragrances of rose petals and incense sticks which will fill your minds with mystic vibes.