Mystery behind the Cursed Citadel 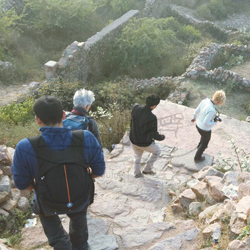 Built as the 3rd city of Delhi, the glorious city of Tughlaqabad was once the might of the Tughlaqs. Walk through the ruins of Tughlaqabad moving towards the magnificent tomb of the founder and builder of this daunting city, Ghiyasuddin Tughlaq. Once a dream project of the Tughlaq’s this defensive imperial city of the Tughlaq’s according to a famous traveller, Ibn Batutta was lined with gold which made it so shiny and bright that it was hard to look at the fort. Today this daunting fort stands isolation.
Explore the colossal citadel of the Tughlaq’s with Delhi walks well-scripted tours to know more about the history of the Tughlaq’s, the Delhi Sultanate and anecdotes associated with this magnificent structure. Become a part of Delhi’s antiquity with our Tughlaqabad walk to understand the mysterious fort that today stands deserted. The city of Tughlaqabad surrendered to the curse of Nizam-ud-din Auliya due to the conflict between the Ghiyasuddin Tughlaq and the pious saint. It is believed that the conflict emerged around the construction of a step-well which apparently the ruthless king did not aid. The angry saint cursed Ghiyasuddin Tughlaq and prophesied his death away from Delhi. In addition, the saint cursed that the fort would lose all its fortunes and remain deserted. A marker of important political events, attack and terrors the impregnable Tughlaqabad Fort As predicted, the once glorious Tughlaqabad fort now remains in shambles, but has an enchanting aura around it and will take you back in time.
Join Delhi Walks for an off-beat tour experience at this mystic fort.