The House of Djinns 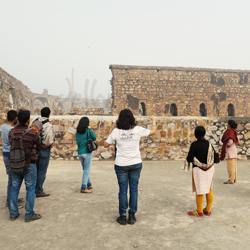 Explore this lesser known Medieval Era Royal citadel gem the on our serene morning experience, decipher the city, the ritual practices and mysticism allied to the esoteric Djinns. Explore with us the abode of mystical djinns and boasts of mysterious caves.

Explore this lesser known Medieval Era Royal citadel which was an architectural gem experience a serene morning experience with Delhi walks at Firozshah Kotla which was known as Firozabad at that time. Located right adjacent to the famous criket stadium in Delhi lies the beautiful palace ruins of Firozabad dating back to Firuzshah Tughlaq’s reign when he shifted the capital from jahanpanah which is in southern part of Delhi today to the northern part of Delhi where lies Firozabad due to the water scarcity in that part of the city. Firozabad city is today famous as The City of Djinns with local people coming and praying to the Djinns who are said to visit and reside here.

Decipher the fifth city of Delhi, the ritual practices and mysticism allied to the esoteric Djinns. Take a walk to this beautiful and serene place and witness the grandeur and splendour of the city must have posessed when it was at its zenith.

You shall be walking through the Royal citadel of a benevolent and philanthropic monarch who not only built this citadel but also has telling tales from other parts of this city of Delhi. The royal citadel overlooks the modern day cricket stadium and gives you a glimpse of people and practices of faith.