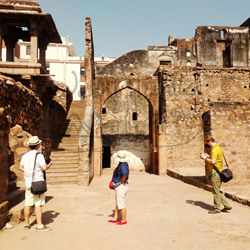 Indulge into an experience around the historical first city of Delhi and take a walk around the Mehrauli Archaeological Park, providing a beautiful panoramic view of one of the UNESCO world heritage sites in Delhi- Qutub MInar Mehrauli Archaeological Park is a broad stretch of over 200 acre open to flaura and fauna with dotted Architectural marvels built over centuries. The park consists of various tombs, mosques and step wells locally called Baolis like Rajaon ki Baoli, Gandhak ki Baoli, Balban’s tomb- where the concept of the true arch and true dome comes in to execution for the very first time in Indian architecture, mosque and tomb of Jamali Kamali and various other structures dating to the Slave dynasty, Khalji dynasty, lodi dynasty, mughal dynasty and contributions made to them by the British when they started to gain power. Explore the hidden gems of the first city of Delhi with Delhi Walks followed by various stories unfold as you take a walk around the enormous Mehrauli Archaeological Park. The site is surrounded by various other historical sites like jahaz Mahal, Zafar Mahal, Hauz-i-Shamsi etc.