The Famous abode of Djinns 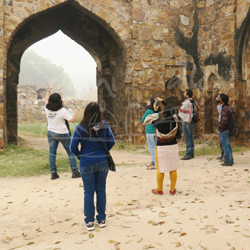 Standing at the junction of Old Delhi and New Delhi near Bahadur shah Zafar Marg, Firoz Shah Kotla was built by Emperor Feroz Shah Tughlaq in the 14th century CE. Once the royal citadel of Feroz shah Tughlaq, today the site stands in ruin because of the various plunders that the fort witnessed. Most of its material was looted and used for the construction of Shahjahanabad and Dinpanah citadels in Delhi. Today the site is a proud stadium where national and international cricket matches are held.
Walk through this ruined medieval citadel. Become a part of the fort’s mysticism and address your vows and grievances to the Djinns of Feroz Shah Kotla. See a generous amount of people writing letters, saying prayers and lighting candles to the djinns in hope of respite. See faith, mysticism spirituality and religions breaking barriers at this magical fort. Walk through the “Minar-e-Zareen”, a highly polished sandstone pillar, originally established in Haryana by Emperor Ashoka and later shifted to Feroz Shah Kotla, Jami Masjid- the oldest and largest extant mosque belonging to the Tughlaq’s while you traverse the ruined fort.
Join our well-scripted walks at Feroz shah Kotla to get the most of history, spirituality, mysticism, talisman at this ruined fort of Feroz Shah Tughlaq. Immerse yourself into the rustic charm of this densely crowded fort, not so much because of its architecture but its Djinns.