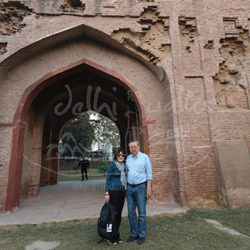 The Last literary symposium (mushaira) of Delhi marked the end of the glorious period of the Mughals under its dispossessed ruler Bahadur shah Zafar II. The last symposium also marked the contrast between the cultured environments of the pre-1857 era that was marred by the beginning of the colonial rule in India. Delhi saw massive rampages and sieges that left irrevocable scars on its glorious past. Although an unsuccessful attempt at freedom, Delhi takes pride in showcasing the artifices of the rebellion.
The landscape of Delhi is strewn with reminisce of India’s first attempt at Independence. An event of utmost despair and remorse today the rebellion of 1857 symbolises the bravery, devotion and dedication of the Indian soldiers who lost their lives in seeking independence for the country. Our 1857 walk takes you through lanes of Kashmere gate strolling around the monuments that stand as a reminder of this unfateful event. Celebrate the brave soldiers of our country and freedom-fighters with Delhi Walks 1857 tour. Know about India’s first attempt at colonial emancipation, the reasons that led to the revolt and the scandalous stories centered on the causes of the rebellion. Find out if they were true.
Join Delhi Walks for an on foot tour about the Revolt of 1857 in Old Delhi. Feed your curious minds with the information provided by our walk leaders. Join our unique way of saying thank you to our soldiers and freedom-fighters, indulge in our 1857 walk tours for an experience that leaves you bewildered.