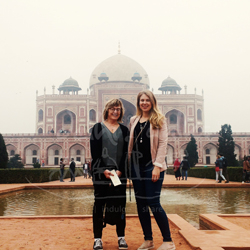 The tour is an all-encompassing experience which covers and completes the entire city over the day. From monuments to culture to architecture to bazaars and shopping, this tour takes you through all of this. We shall start our day with visit to Purana Qila, a Defence fortress built by Humayun in 1533 and completed in 5 years, was the sixth city of Delhi. In 1540 Sher Shah Suri defeated the former king and renamed the fortress as Shergarh. Humayun recaptured it in 1555 but died the next year in the same fort. Further we will explore the tomb Hamida Banu Begham built for her husband Humayun in 1562 AD. Designed by Mirak Mirza Ghiyath,a Persian architect. It was the first tomb with gardens in it on the Indian Subcontinent. Some of the interesting features of the massive tomb are the bath chamber, the sand stone mausoleum and a pavilion. Humayun’s Tomb is now a UNESCO World Heritage. The tour continues with visit to Red Fort also known as the Lal Qila or “Qila-i-Mubarak”. It was built by Mughal emperor Shahjahan between 1638 and 1648 for the royal family residence. There were many more developments in it till the end of Aurangzeb’s reign and marked the zenith of mughal ingenuity. In 1857 it was lost to the British Empire. There are several attractions within such as the Diwan-i-Khas and the Diwan-i-Am. The Rang Mahal houses the famous lotus-shaped fountain and the fort is also popular for its gardens, mosque and various halls.