Beyond the Temple of Bahai 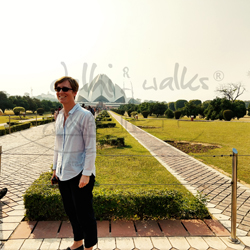 Have look at the hardwork of a team of about 800 engineers, technicians, artisans and workers brought to realization one of the most complicated constructions in the world also commonly known as Lotus Temple belongs to the Bahai faith where the basic principle is unity and equality of all people. the religion originated in Iran and spread out to the other parts of the world during the mid 19th Century. Reiterating the principle of unity of all people and openly rejecting notions of racism and nationalism the basic doctrine of Bahá’í teachings is the goal of a unified world order that ensures the prosperity of all nations, races, creeds, and classes. Inspired by the graceful lotus flower, the composition of the Lotus Temple in New Delhi is composed of 27 free-standing marble dressed “”petals”” arranged in an array forming a gigantic lotus flower. Visit the peaceful Bahai temple complex with Delhi walks and get to know many more details as you walk through the grand complex.