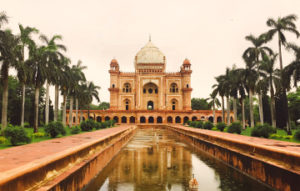 One of the mausoleums which is right at the center of the junction connecting New Delhi to Old Delhi. A marble and sandstone structure built right when the Mughal Dynasty was crumbling to commemorate the remains of Wazir-ul-Hindustan. The mausoleum was built by the Prime Minister’s son Nawab Shuja-ud-Daula stands as the last garden tomb depicting Mughal architecture.