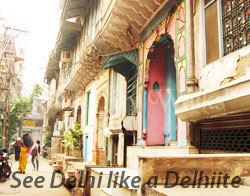 Delhi is the show-window of India! Delhi, they say, doesn’t belong to anyone. Yes, it doesn’t belong to any particular community, but the city does belong to millions who call it home. For ages, people from different parts of India, and Asia, have come here and settled down.The city has been growing non-stop, making it a rich experience for the visitors!

Being the capital of India and its political and cultural centre, Delhi is indeed a perfect city for a walking tour & slow travel.
Delhi has always held a special allure for global visitors – thousands stayed on and became Indians! With its amalgamation of diverse cultures, ancient monuments, beautiful parks, broad avenues, bustling markets and shops, the labyrinth of Old Delhi’s lanes, a vibrant nightlife, its inherently friendly, welcoming people and much more, Delhi is assuredly an awaiting kaleidoscope of experiences and the best way to explore this kaleidoscope is through a walk.

Exploring Delhi can be fascinating and rewarding at the same time
The city consists of Old and New Delhi, each of which boasts of several spectacular attractions. While Old Delhi is dotted with a number of majestic forts, striking temples, and other historic buildings that are ideally reminiscent of the history of India, New Delhi presents a relatively modern picture with government houses, embassies and other official buildings that are home to several top-level dignitaries.

The city is visited by travelers from all over the world and only the art of good storytelling and an exclusive walk can reveal its true rich soul.

Walk Along the Water and Heritage